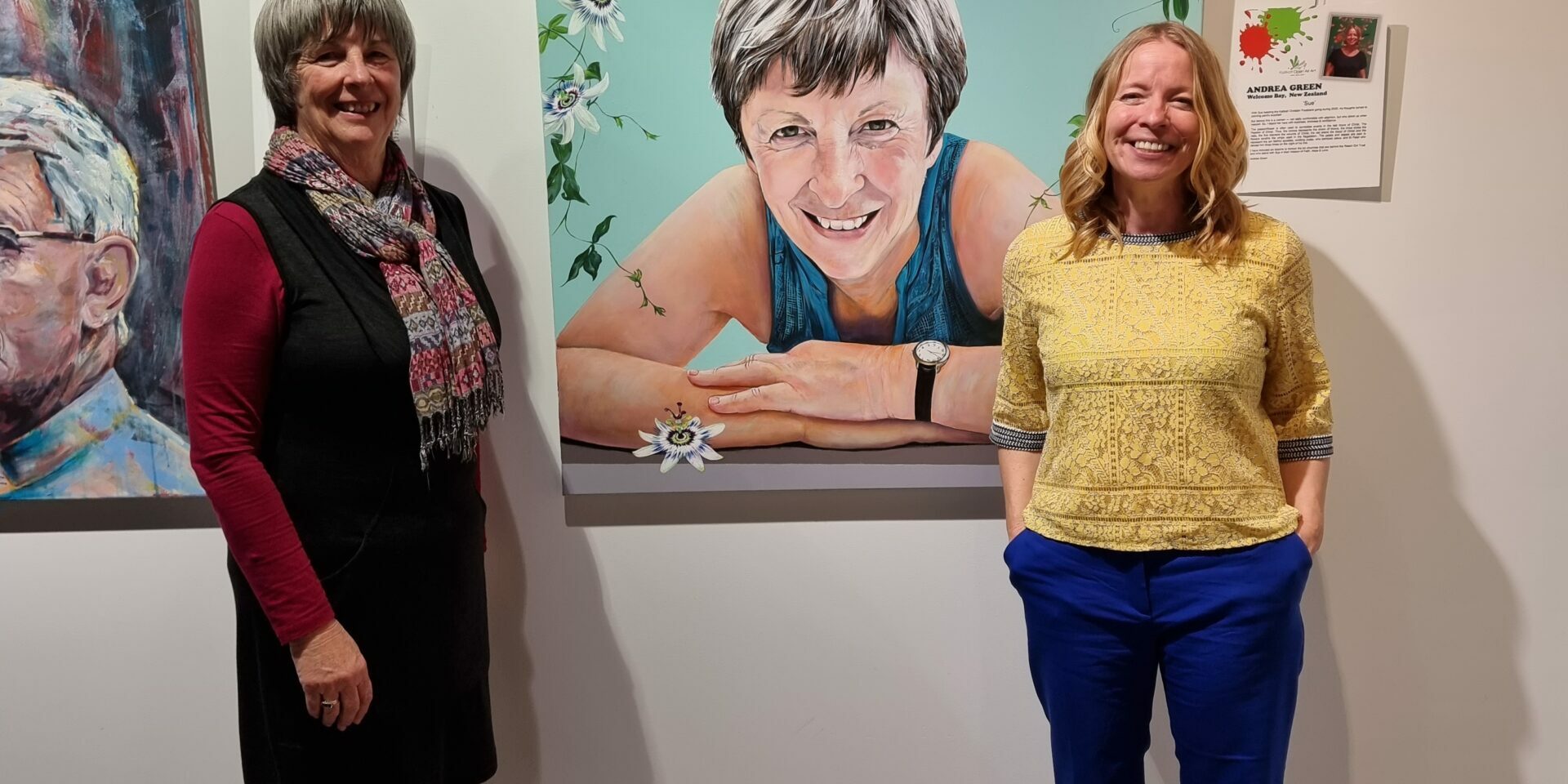 On Saturday 30th July the much anticipated winners of the NZ Mural Contest were finally revealed at a prize-giving event at The Arts Junction in Katikati.

The 2021 /22 New Zealand Mural Contest, originally planned for October 2021 and postponed to April 2022 due to Covid, was held ‘virtually’ to ensure no further disruption.

Seven New Zealand based artists (four from Tauranga, one from Waihi and two based in Wellington), along with the two Australian artists competed for $12,000 in prize money and the June Carlton Memorial Trophy and the Spirit of Katikati Award from their home studio ‘bubbles’.

The theme for the contest was ‘Katikati’s Unsung Heroes of 2020’ and nine nominated heroes from the community were chosen to be painted by the competing artists. Each artist painted a portrait of one of the unsung heroes over five days, reporting on their progress via a video link open to the public.

The completed portraits were shipped to Katikati and displayed in the Carlton Gallery at The Arts Junction during July, where the public was invited to vote for their favourite painting for the “People’s Choice Award’.

Winner of the June Carlton Memorial Trophy was artist Andrea Green for her portrait of Sue Spriggens, who represented the Katikati Christian Foodbank.

Third prize was awarded to artist Michelle Estall for her portrait of Chris Steel, representing the Katikati Advertiser.

The Spirit of Katikati Award went to artist Michelle Estall and the People’s Choice Award was awarded to Shane Walker for his painting of Anna Menendez, of Anna Menendez Photography.

The judges of the Mural Contest were Western Bay of Plenty District Council Mayor Garry Webber, Steve Graveson, Katikati Open Air Art President and Damien Kurth, an accomplished artist and art tutor from Tauranga. “Choosing the winners was not easy,” says Steve. “The standard of the portraits was very high considering that they had been painted in an unusual high-pressure situation, with not a lot of time.  The artists also had the difficulty of not meeting their subjects until the prize-giving night. As judges we had to take into count several factors to help narrow down the final winners – it was an interesting challenge!”

Organisers of the biennial event, Katikati Open Air Art say the 2022 event was both rewarding and also very challenging. “We had to organise two events with the contest held virtually and then the prize-giving months later, it was quite a mission,” says Steve. “On the upside this contest was very different from past events which created lots of attention. The theme that highlighted the lockdown we’d all been through and celebrated local people we know also created a lot of community interest.”

The nine portraits celebrating the ‘Unsung Heroes of 2020’ will eventually be transformed into a mural for display in Katikati.

Re-Envisioned – When recycling, the imagination has no limits
June 8, 2022